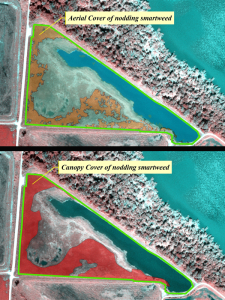 The IWMM protocol requires estimates of cover to assign water depth classes, estimate habitat class proportions, and assess vegetation composition. We are using a canopy cover approach: defined as the percentage of the survey unit covered by vertical projections from the outermost perimeter of plants’ foliage (Anderson 1986). Canopy cover is not equal to an estimate of aerial cover since spaces between the outermost perimeter of the spatial extent of the feature being estimated are ignored. This is a common approach for plot scale vegetation monitoring protocols and has bene scaled-up in the IWMM approach. The two approaches to cover are illustrated using the scanned image of a management unit: