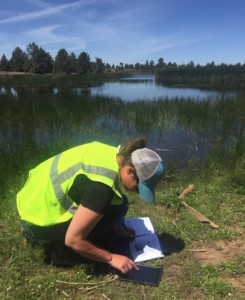 In the first year of use (2018-19), nearly one-quarter (23%) of the total participants used the app for at least some of their data collection.  Several new features and user flow improvements were completed in the summer of 2019 (details below) and in the second year of use, app participation grew to nearly 40%, while overall IWMM participation grew by 23%.  As of April 2020, IWMM includes 59 NWRs, 4 state-administered projects, and one NGO for a total of 64 participants, up from 52 at the close of last season.  Nearly all of this season’s new participants also utilized the app for data collection.

Building on our success in Year 1, the IMA development team sought to address a number of field-based requests and further improve user flow and functionality.  The Year 2 update was completed in September 2019, and provided improvements to counting methods, added in-form user instructions, and created a summary report enabling users to quickly review survey data prior to submission.  These improvements were developed specifically in response to feedback and requests from Year 1 app users.  Full update details can be found HERE.

IWMM continues to pursue a position of being the “go-to” choice for stations with significant waterbird resources.  Our nationwide protocol framework, dedicated user support, field-proven mobile app, and online database and analysis tools have all been designed to bring success to waterbird monitoring and management efforts.  As more stations complete IMPs in fulfillment of NWRS leadership goals, we hope to see IWMM play an even larger role in waterbird conservation, both at the refuge level and across the broader landscape.

IMA is currently available only for federally administered wildlife refuges and waterfowl production areas. However, partners outside the federal system are welcome and encouraged to join IWMM where management objectives for migratory waterbirds align. Partners with an enterprise account for ArcGIS online (AGOL) may be able to build their own mobile data collection process by utilizing products created during the development of IMA. For more information, please contact the IWMM National Project Coordinator, Robert Fenwick (robert_fenwick@fws.gov).