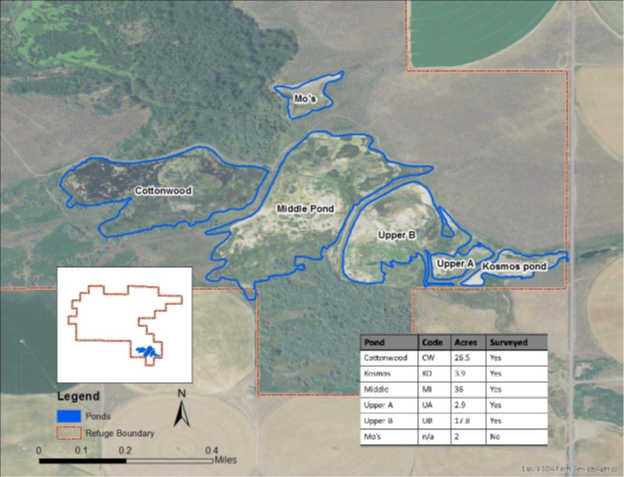 Cold Springs National Wildlife Refuge (Refuge) was established in 1909 by Executive Order 1032, to serve “as preserves and breeding grounds for native birds” and “as inviolate sanctuary, or for any other management purpose, for migratory birds”. The 3,117-acre refuge is located in northeast Oregon, just south of the Columbia River and within the Columbia River Basin. As an “overlay” refuge, Cold Springs Reservoir dominates the Refuge and provides open water or mudflat habitat, depending on the season. Bureau of Reclamation is responsible for managing the reservoir for irrigation water. However, Refuge staff manage the other habitats, including native grassland, seasonal wetlands, riparian, and shrub-steppe. A variety of vertebrate wildlife species occur on the Refuge, with 212 documented species of birds, at least 21 species of mammals, 14 presumed species of reptiles and amphibians, and at least 7 species of fish. Seasonal wetlands occur in the Memorial Marsh Unit and are managed for winter and spring habitat for migratory waterfowl. Within the Columbia Basin, annual waterfowl populations peak in winter and early spring, and over 18,000 waterbirds have been documented using the Refuge during these periods. Refuge staff have conducted winter waterfowl counts since 2012.

In 2016, the Refuge joined the Integrated Waterbird Management and Monitoring (IWMM) program in order to tie management activities and habitat conditions in the Memorial Marsh Unit to seasonal bird use. IWMM’s integration of habitat surveys, vegetation surveys, and bird surveys enables the Refuge to link all these variables to management actions. While the hydrology of the seasonal wetlands limits the Refuge’s ability to manipulate water levels, IWMM data will be used to better inform vegetation treatment activities to promote desirable plants such as swamp timothy (Crypsis schoenoides) and discourage undesirable/invasive plants, as well as relate bird numbers to plant community composition, improving insight on locally valuable food species. Additionally, IWMM surveys will enable tracking of management objectives. Objectives for seasonal wetlands are defined as 1) >60% cover of desirable and/or native wetland plants, including moist-soil annuals, 2) <20% cover of native emergent species that are >5 feet tall (e.g. cattail, hardstem bulrush), and 3) <40% cover of undesirable/invasive plants. Beyond the Refuge level, participation in IWMM fosters waterbird conservation on a regional and flyway scale through sharing of data with the Avian Knowledge Network.