Be a Part of the IWMM Team: Use Our Online Tools

Be a Part of the IWMM Team: Use Our Online Tools 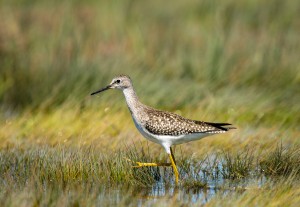 Waterfowl, shorebirds and wading birds frequently overlap in habitat use, with each guild having specific habitat requirements during the breeding, migration and winter seasons.  This makes habit management for waterbirds a challenging, year-round job.  Integrated Waterbird Management and Monitoring (IWMM) was developed to specifically address habitat needs for waterbirds during the wintering and migration phases of the annual cycle. In January 2015, IWMM’s monitoring protocol was approved as the National Protocol Framework for the Inventory and Monitoring of Nonbreeding Waterbirds and their Habitats.  More recently, IWMM completed the second phase of its online database release, designed to support those using the protocol and managing habitats for waterbirds. With the full suite of online tools now available, including data entry, project management and decision support, there has never been a better time to join IWMM!

As the Southeast Contact for IWMM, I have been working with National Wildlife Refuges (NWRs) and States to help them setup their sites in the IWMM database as a “project,” a collection of survey units that are administered as a single unit. Refuge and State projects are identified by the Refuge name (e.g. Mattamuskeet NWR), or the name of a Wildlife Management Area or Game Land (e. g. Suggs Mill Pond Game Land in North Carolina).  Once your Project has been setup, you can complete your registration and be granted access to the IWMM database. Instructions for registering can be found here.

Once a project is created and you are registered, you can define your management units (e.g. managed impoundments, agricultural fields, ponds, natural wetlands, etc.). Both actively and more passively managed units can be enrolled. Several options exist to set these units up in the IWMM database.  IWMM regional contacts can assist you or you can use the IWMM online database page entitled Create and Manage Sampling Units. The following options exist to create your units:  an online form, GPS-U file, Waypoint Plus file, KML file and a shape file loader.

Many of the NWRs along the South Atlantic Coast participated in the pilot phase of IWMM’s development from 2010-2014, and have continued utilizing IWMM protocols to track waterbird use and vegetation and unit conditions.  This information has been used to evaluate their annual management actions and bird response, and IWMM has been incorporated into their individual refuge inventory and monitoring plans.  In addition, several Atlantic Flyway States (e.g. Delaware, North Carolina, South Carolina, Georgia and Florida) also participated in IWMM’s pilot phase, and staff from Delaware’s Department of Natural Resources and the North Carolina Wildlife Resources Commission have continued utilizing IWMM protocols. The advantages these users derive from the IWMM approach include monitoring via a standardized protocol; stream-lined, online data entry of waterbird use, vegetation and unit conditions, and management actions; and multiple reporting tools to help understand and inform decisions about waterbird occurrence and habitat use in project areas .

So, what are you waiting for? Join IWMM today!