At many locations managed to provide habitat for waterbirds, managers recognize that maximizing benefits for one group of birds may not necessarily maximize them for another. In fact, without careful planning, efforts undertaken for one group of birds may negatively impact habitat use by another. Part of the reason IWMM focused on waterfowl and shorebirds as two of the three focal guilds was due to the recognition that efforts undertaken for waterfowl were often not optimum for supporting shorebirds. For instance, timing of actions like flood ups and draw-downs is crucial but different for successfully attracting use by these guilds. By providing waterbird count and habitat use data for each of these guilds during migration and winter, the IWMM monitoring protocol can help inform decisions about how best to manage a unit given tradeoffs for these guilds.   This is the approach currently being implemented at Mattamuskeet National Wildlife Refuge, where IWMM developed local-scale decision support to aid managers in their efforts to maximize benefits for both waterfowl and shorebirds. 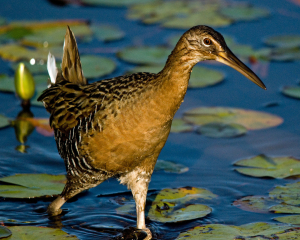 IWMM also recognizes that secretive marshbirds comprise another important wetland bird guild and that there can likewise be tradeoffs in managing a unit for migrating or wintering waterfowl vs. breeding marshbirds. However, monitoring secretive marshbirds requires a different protocol from that currently used by IWMM. At sites where there are competing objectives for waterfowl and marshbirds, one approach is to combine data collected under the IWMM protocol with data collected under the National Marshbird Monitoring and Research Program. This was the approach recently taken by IWMM scientists developing local-scale decision support at Clarence Cannon National Wildlife Refuge, where goals were to maximize habitat use by migrating waterfowl and breeding marshbirds.