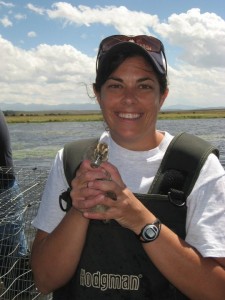 IWMM is pleased to have Dr. Mindy Rice on board as a spacial ecologist

IWMM is pleased to announce that Dr. Mindy Rice was hired as a spatial ecologist with the Natural Resource Program Center (NRPC) in Fort Collins, Colorodo, part of the National Wildlife Refuge System (NWRS), in early September, 2016. Mindy will focus on science tasks for IWMM, as well as incorporate IWMM spatial models to improve the NWRS TRACT tool for property assessments, and other spatial models as needed.

Prior to coming to NRPC, Mindy was the spatial ecologist for Colorado Parks and Wildlife at Fort Collins, CO, for eight years. There, she worked with other researchers and biologists using existing data to look at animal movements and habitat use. Mindy  completed models for Greater sage-grouse, Gunnison sage-grouse, mule deer, elk, mountain lion, lynx, and wetlands, and also worked on many other smaller projects.

Mindy completed her undergraduate work at Colorado State University in zoology and biology in 2001. In 2003, she obtained a Masters’ degree in conservation biology from Manchester Metropolitan University in Manchester, England, and studied black rhino bedding sites at Sweetwater’s Reserve, Kenya. In 2006, she obtained her PhD from Texas Tech University in Lubbock, Texas, and studied black bear recolonization in the Big Bend National Park area. Before moving on to Colorado Parks and Wildlife, Mindy completed a post-doc position at Texas Tech on spatial patterns of Northern Pintail survival from band recoveries.