A lot has happened in the past year and we’re excited to share several updates!

Six new IWMM project sites collected data during the 2018-2019 non-breeding season.  Seven additional projects have been created this spring in anticipation of the 2019-2020 season and we hope to add even more participants this summer.  Interested in joining IWMM? Click here to access our New Project form. 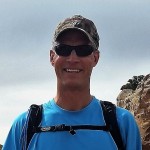 We have a new IWMM Project Coordinator!  Rob Fenwick joined the Inventory & Monitoring team of the National Wildlife Refuge System in 2018 and works out of the Natural Resource Program Center (NRPC) in Fort Collins, Colorado.

Read more about Rob and other new additions to the IWMM program. 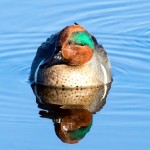 Our new Regional IWMM Coordinator strategy is now in place! As a nationwide program, IWMM benefits greatly from the presence and efforts of program “champions” in each Fish and Wildlife Service administrative region.  We have given these champions the title of “Regional IWMM Coordinator” and recently released guidance regarding their roles in support of IWMM. To connect with the coordinator(s) for your region, please visit the IWMM program website. 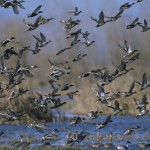 Site-specific protocol development is off and running!  Five National Wildlife Refuges have now completed site-specific protocols (SSPs) for IWMM and more are in the works.  These plans carefully delineate the process for applying the IWMM national protocol framework to a specific survey location.  Because IWMM is a nationwide program, the protocol framework operates best when it is “stepped down” in consideration of local and regional variables.

This spring, the IWMM Steering Committee (SC) made the decision to move away from standing work teams to a more flexible and efficient structure focused on accomplishing specific tasks.  We are optimistic this approach will reduce time commitments while enabling task leaders to recruit content experts on a limited, ad-hoc basis when necessary. Task needs and updates will be communicated through future newsletters on a quarterly basis.  We invite past work team participants and those interested in assisting to contact the IWMM Project Coordinator or SC Chair for more information. 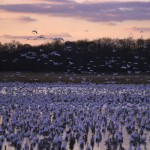 Have you ever wondered what a flock of one million snow geese actually looks like?  Darrin Welchert, Wildlife Biologist at Loess Bluffs National Wildlife Refuge (LBNWR) can tell you.

Most of the refuge is located along the eastern edge of the Missouri River floodplain in a historic wetland area.  Habitat types include wetlands, grasslands, forests, and developed land. Learn more and experience the refuge with a short video.